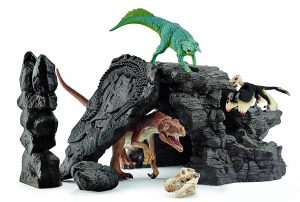 The Schelich Dinosaurs Dino Set with Cave comes with one cave, three dinosaurs and a skull. The cave stands at around 20cm high and 35cm wide, the front part of the cave is made from a column and a large rock that balances on top. 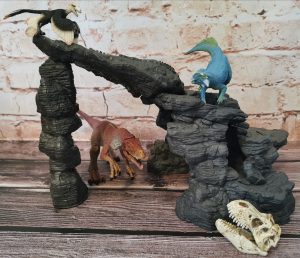 Stop unwanted visitors getting in to your cave by keeping a look out and giving the top rock a quick nudge to send it tumbling to the ground and knocking both the column and the unsuspecting intruder over! Another clever feature is that the top of the rock can also be constructed to turn it in to a catapult so you can launch rocks and other items to make sure your home isn’t taken over! We love how well thought out this is and children will enjoy catapulting the rock off the cave! 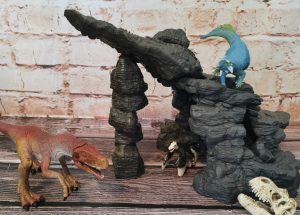 The dinosaurs included in the set are a Microraptor which is a four-winged Paravian dinosaur, a Herrerasaurus which is one of the earliest dinosaurs and a Psittacosaurus whose name translates in to ‘Parrot Lizard’. The Herrerasaurus has a moving jaw which adds a great element of fun! They may all come in the set together but do they get on…? Create your own stories for endless fun with this fantastic set and add more dinosaurs from other sets for even more imaginative play and therefore extending the play value of the toy. 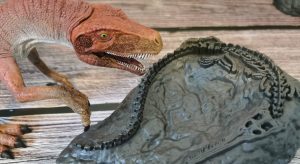 As with all Schleich toys, the quality is outstanding, the details on every part of this set are fantastic. The rock that acts as a catapult has a dinosaur fossil detailed on the top and each dinosaur looks as realistic as you would imagine they would have been. Imaginative play is so important during childhood as it helps to develop a child’s social skills when they play with others as they learn to share and take turns, it can teach children negotiation skills and how to express themselves through play as well as evolving language and communication skills as they talk and listen when playing. The Dino Cave Set retails at £44.99 and you can find it here.

To go with the Dino Cave Set we were also sent a set of two dinosaurs which consists of a Spinosaurus and a small T-Rex. These are both said to be amongst the largest carnivorous dinosaurs in the world, with Spinosaurus being around some 25-45 million years before T-Rex. The colours and details on these dinosaurs is outstanding, so much attention to detail which makes it so much easier for children to really imagine what they would have looked like! These are such a great addition to any Schleich dinosaur sets that you already have or simply just to play with as they are as your child will have hours of fun creating their own imaginary world. 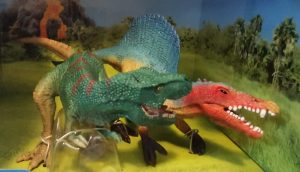 Dinosaurs capture the imagination of both boys and girls of all ages which make these lovely sets of small dinosaurs great for giving as a gift. The fuss free and plastic free packaging is a big bonus too! This set retails at £13.99 and you can find them here. 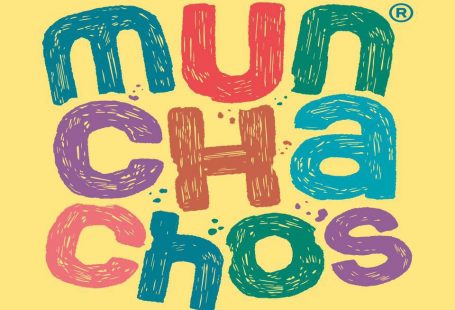 REVIEW: Ravensburger Days Out No. 1 The Stately Home