As part of the Blogger Board Game Club, we have been sent the Concept game to play and review! In short, the aim of the game is to guess the word that one team has on a card in front of them by looking at the clues to associated icons that they have marked for you.

In the box you get the main game board, 4 player aid cards, 5 sets of pawns and cubes, 110 concept cards, tokens, a bowl and the instructions. The deck of concept cards are shuffled and placed face down on the game board. On each card there are three sets of words (easy, hard and challenging) and the game board is covered with icons which will help you to guess the word. One team pick up a card and choose a word for the opposing team(s) to guess, they then use the green pawn to mark the main concept and small cubes to clarify it, further sub concepts can be added if required but it is best to start off with the easy words while everyone gets used to play. 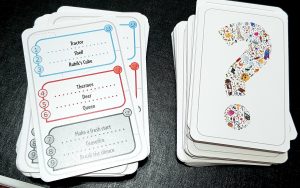 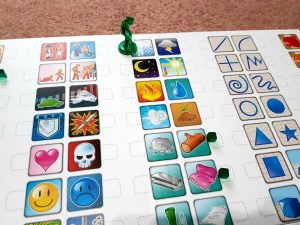 There is to be no verbal communication with the other players aside from ‘yes’ if a good answer is given or they are on the right track. Correctly guessed words are rewarded with double tokens and single tokens are given to each member of the team whose word was guessed. Once all of the double tokens have been claimed, the game ends and the player or players who have scored the most tokens win the game.

Each icon could have more than one meaning, for example, the icon which shows a plate of food is described as ‘food/nutrition/edible’. The player aid cards can be used by the teams as the game is played, and they act as a helpful key to the icon meanings (as there are plenty to remember)! 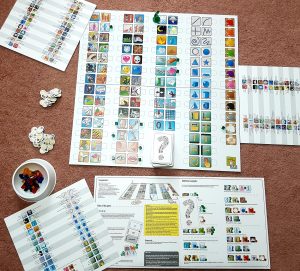 The green ‘question mark’ pawn is always used to mark the main concept, the small green cubes can then be used to mark clues. If the green pawn is placed on the ‘wildlife/animal’ icon and a small green cube is placed on the ‘water/liquid/aquatic’ icon then a good guess for this word would be ‘fish’. If a team was trying to guess ‘the Eiffel Tower’ they may find the main green pawn on the ‘building/construction/city’ icon with the small green cube on the ‘metal’ icon. But this could be many things so a sub concept can be added by using one of the exclamation mark pawns. By putting this pawn on the ‘location/country/flag’ icon and then placing the small cubes on the blue, white and red icons, the team can guess a country that has those colours in their flag (France) and therefore work out that the word could be a building/construction in France – The Eiffel Tower. 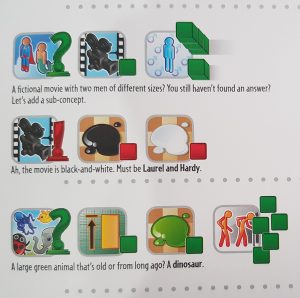 Concept Board Game is suitable for ages 10+ and can be played with between 4-12 people. The idea is quite simple and relatively easy to explain but you need a few turns to really get the hang of it! The player aid cards are a great help and there are lots of visual examples in the instruction leaflet which make play easier to understand rather than having it written out. Once you have played a few times and you have the same word to guess, you will find it fascinating that other people will ‘explain’ the word through icons in a completely different way to you as not everyone works things out in the same way! This means that game play will always be new and exciting, even when you have played plenty of times.

Overall, a great game to play with the family, not too long and not too short, it moves quite quickly and a great to play with a range of ages as there are no tactics involved for those who aren’t so keen on games that you have to think about too much. 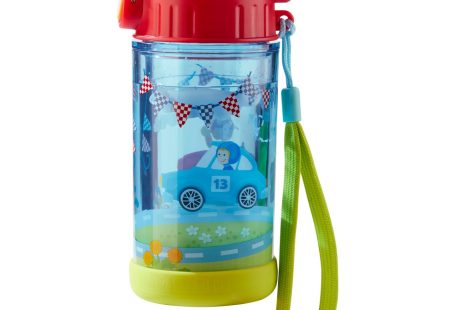 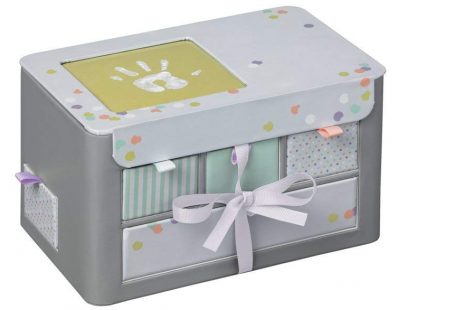 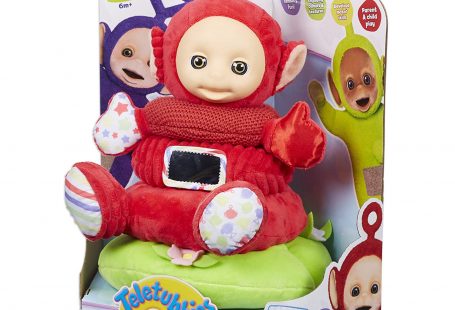