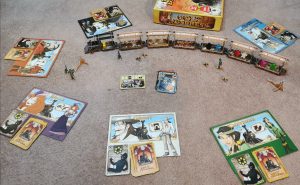 Before you can begin playing, you have to assemble the train cars and locomotive, there is a separate instruction sheet included which shows you how to do this. All of the pieces are popped out of a thick cardboard, they are all very detailed on both sides and once slotted together they create lovely, solid pieces that feel sturdy and won’t fall apart. 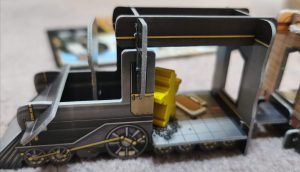 The train pieces are designed to stay together, rather than be taken apart and inside the box you can create separate compartments for all of the pieces to live in safely. So there is not an actual ‘board’ for this game, it is played on the train which is very fun and a certainly makes this game stand out! 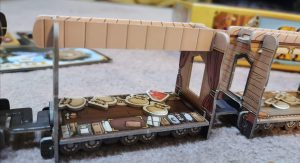 Use the locomotive and add one train car for each player; there are different round cards depending on the number of people playing, we played with 4 so we used the green set of cards. Each player also gets a character sheet, a character card, 10 action cards, 6 bullet cards and a bandit figure. Randomly choose a bandit figure, the person who has chosen this one as their character goes first. Place the bandits on the train, starting with the first player and going clockwise, players alternate placing their figures on the train and the adjacent car. Take 1 $250 purse token for each player and then place loot tokens on the floor of each cart (each one is indicated on the floor of the cart). The Marshal figure and a strongbox gets placed in the locomotive and the 13 neutral bullet cards are placed in a pile next to it. Each player chooses a character and corresponding character sheet and places it in front of them as well as a $250 purse which is to be kept face down. Each player gets 6 bullet cards which need to be placed faced down in ascending order (these are used to fire at your opponents to slow them down)!

The aim of the game is to become the richest bandit in the Wild West and this is done by getting more loot than your opponents and by not getting shot! Each game has 5 rounds which is made up of 2 phases – Schemin’ and Stealin’. During the Schemin’ phase, each player will program their bandits actions by playing an action card and placing it in a pile; it is useful at this point to try and imagine what you want your bandit to do and where you want them to go. Once all the players have taken a turn it is time to put the Schemin’ in to action! 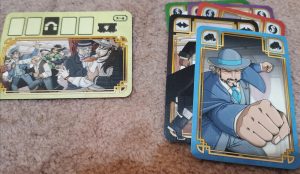 All the action cards that have been played are now applied, one by one, in the order in which they were laid. Once this has been done you start another Schemin’ phase and then another Stealin’ phase until a total of 5 rounds have been played. At the end of these rounds you need to add up all your loot tokens, the Gunslinger prize is awarded to the player who shot the most bullets (they win $1000) and the winner is the person who is the richest! 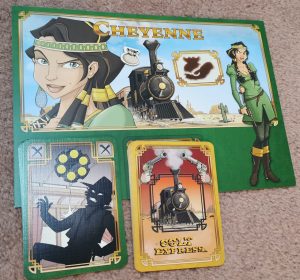 There are, of course, lots of different rules and exceptions for each of the cards and how they can be played. The instructions detail very well all the circumstances in which cards can be used which we found really helpful as there are quite a lot of variations to get to grips with. The full colour booklet is full of pictures and illustrations which will guide you as you play but do expect your first couple of games to be slightly slow paced as you work out your strategies! 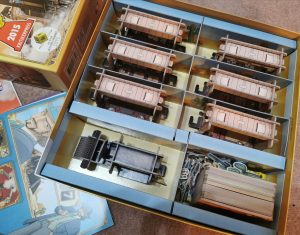 Colt Express is very different to any board game that we have played before and we all loved the non-traditional element of not actually playing the game on a board! The extra touches like the desert landscape and being able to turn the inside of the box in to a handy storage box are really great features. We have played it a few times and once you get the hang of it then it can be a relatively fast paced game and once you get to an expert level there is an ‘expert variant’ at the back of the instructions that you can try! Overall, a really fun game that you don’t have to take too seriously as its unpredictability makes it exciting and fun to play! Colt Express is aimed at ages 10+ and can be played with between 2-6 players and a game takes around 40-50 minutes to play.

REVIEW: Back to School with Helix Maped 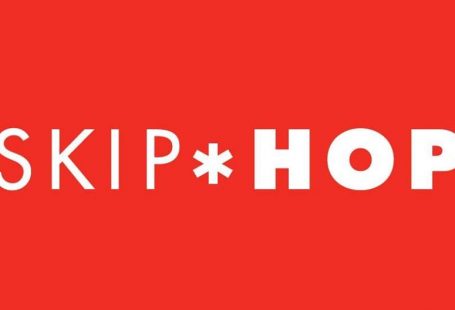 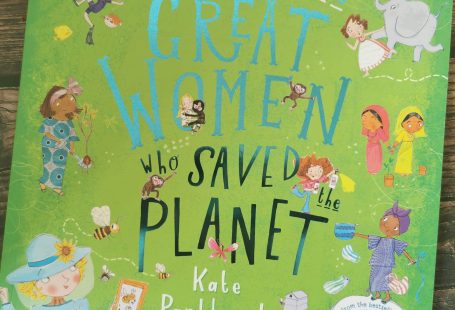 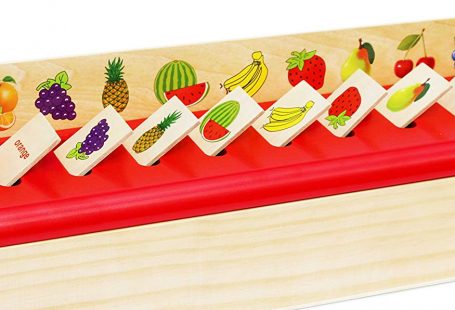